3 Reasons Why You Should Read Sweet Deceptions – By Angel Nicholas

So, here she is with a quick blurb and then her 3 reasons: 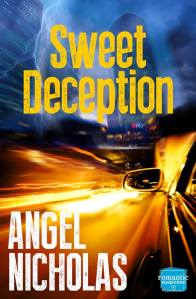 Her boring existence seems perfect until a charming detective threatens Ally’s heart and lethal contract killers jeopardize her happily ever after.

Ally Thompson’s life is perfect. Calm, quiet, some might even say boring. The sole survivor of a tragic accident, she’s not the adventurous type—something she’s decided to change.

A murder and a detective in disguise shatter Ally’s first attempt at “fun.” Detective Greg Marsing is everything Ally knows better than to want. The gun-totting, tattooed scumbags trying to kill her are almost a welcome distraction from her pointless attraction.

A contract on Ally has every lowlife for miles gunning for her. Sparks fly while she and her unlikely hero scramble to unravel clues. As the deadly game escalates, Greg has to decide if self-preservation rates higher than a love worth dying for.

The 3 reasons you should read Sweet Deception are:

1. Ally Thompson leads a quiet life, hiding from the world and hobbled by fear of anything that even appears adventurous. Reaching number one on the city’s hit list may not be the ideal way to break out of your rut, but it certainly does the trick for Ally! She discovers the remarkable woman within throughout the course of multiple attempts on her life.
2. She doesn’t think Detective Greg Marsing could possibly be interested in her less than perfect, rather chubby self. In fact, the charming Detective is immensely interested in Ally. The difficulty lies in his fear of getting too close to anyone other than his sister, thanks to a traumatic event in his past.
3. Ally has more than her fair share of dangerous criminals after her. She’s threatened, attacked, held at gunpoint, kidnapped, and more. Little does she know the danger lies much closer to home than she ever imagined.

Oh, God! He was shooting at her. Actually shooting. In broad daylight. In her neighbor’s backyard. Didn’t they have rules about that sort of stuff?

Nerves shredded, Ally gritted her teeth. Three more feet. Two. Another crunch. She swore the heat of the bullet singed her shoulder. Arms extended, she jumped for all she was worth. Up, braced her arms and pushed off. She landed with an oomph on the other side, followed by another crunch and a hole in the wood fence.

For a split-second, she crouched panting, staring in disbelief at the fence towering over her head. Had she really done that?

Cursing from the other side got her up and moving again. Squealing tires and a revving engine brought her head around. A car tore into the alley and raced toward her. More bad guys? Had he called in reinforcements?

Did I do something horrible in a past life to deserve this?

Truly, I’ll help the poor. Serve food at the soup kitchen. Go to church every Sunday. Donate money to the shelter. I’ll even babysit my friend’s bratty kids Just please, please, please get me out of this alive.

The shiny black Camaro careened to a stop with the driver’s side door facing her. Heavily tinted windows revealed nothing. In a last desperate bid for freedom, she darted past the door. Strong arms encircled her waist and dragged her back toward the idling car.

“No!” Ally screamed like a banshee, flinging out her arms and legs, scrabbling for purchase. Hard hands sent her flying across the front seat.

“Let me go!” She dove for the door handle.

“Ally!” He grabbed her elbow and pulled her back, away from the passenger door. “Damn woman, you are way more trouble than you’re worth.”

Almost blind with panic, she twisted around and crouched on the seat, prepared to draw blood.

Shocked hazel clashed with furious aqua. Her mouth fell open. Muttering under his breath, Detective Marsing threw the car into gear and spun out of the alleyway. She whipped her head around in time to see a blocky head pop up over the privacy fence as they disappeared around the corner. She’d done it. Escaped. Stayed alive. Like an atomic bomb, the events of the past hours and the emotions she’d worked so hard to control mushroomed up, exploding inside. Tears stung.

“Can’t you stay out of trouble for five minutes?”

The only girl in the midst of four brothers, Angel Nicholas spent her childhood hiding behind romance novels. Now the mother of four overly-energetic children, a Whimsy kitty and slobber-flinging Great Dane, fiction is still her refuge. Excessive caffeine fuels her typing, stiletto heels maintain her sass, and the splendors of Idaho alongside its gregarious people inspire her muse.

Find Angel on Facebook, Twitter, Google+, Goodreads, and on her website! You can also favorite her Amazon Author Page to receive emails when new books are available!